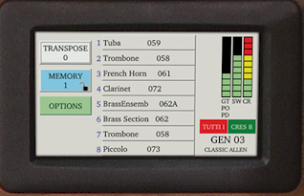 “What’s an Intuitive Interface?  An intuitive interface is one that works the way the user expects it to.  In other words, we find something intuitive when we don’t have to think about it.”  Princeton University, User Experience Office

The organ is the King of Instruments because of its majestic sound and incredible dynamic range.  Organists interact with the complex instrument via the organ console.  Early pipe organ consoles were limited to keyboards, a pedalboard and stop controls.  Even with these limited controls, changing dozens of stops during performance was daunting.  In the early 20th century capture combination action systems were added, making preset stop combinations available freeing up organists to be more creative.  Since then organ builders have added more sophisticated user interface systems.

With the advent of digital technology, organs went through a revolution.  Today’s finest digital organs can duplicate the sounds of pipe organs.  With increasing power, computer processors have also expanded instrument versatility.  Additional functionality includes record and playback capabilities, the addition of orchestral and contemporary voices, multiple stop specifications, and more.  However, these additional features have also increased the number of physical controls and complexity for performers.

The challenges brought about by increased console capabilities is not limited to organs, but to all technology-based products.  Automobiles include GPS, Bluetooth, backup cameras, and sophisticated audio and climate controls that required separate buttons and knobs that distract drivers.  Consumers demanded more intuitive user interfaces.  The answer: color touch screens that have become the universal solution for high-tech products.

The most important task for technology is to enable the production of realistic pipe organ sounds.  The technology should also enhance the user experience, allowing organists to focus on creating music.  An advanced digital organ requires a state-of-the-art human interface.