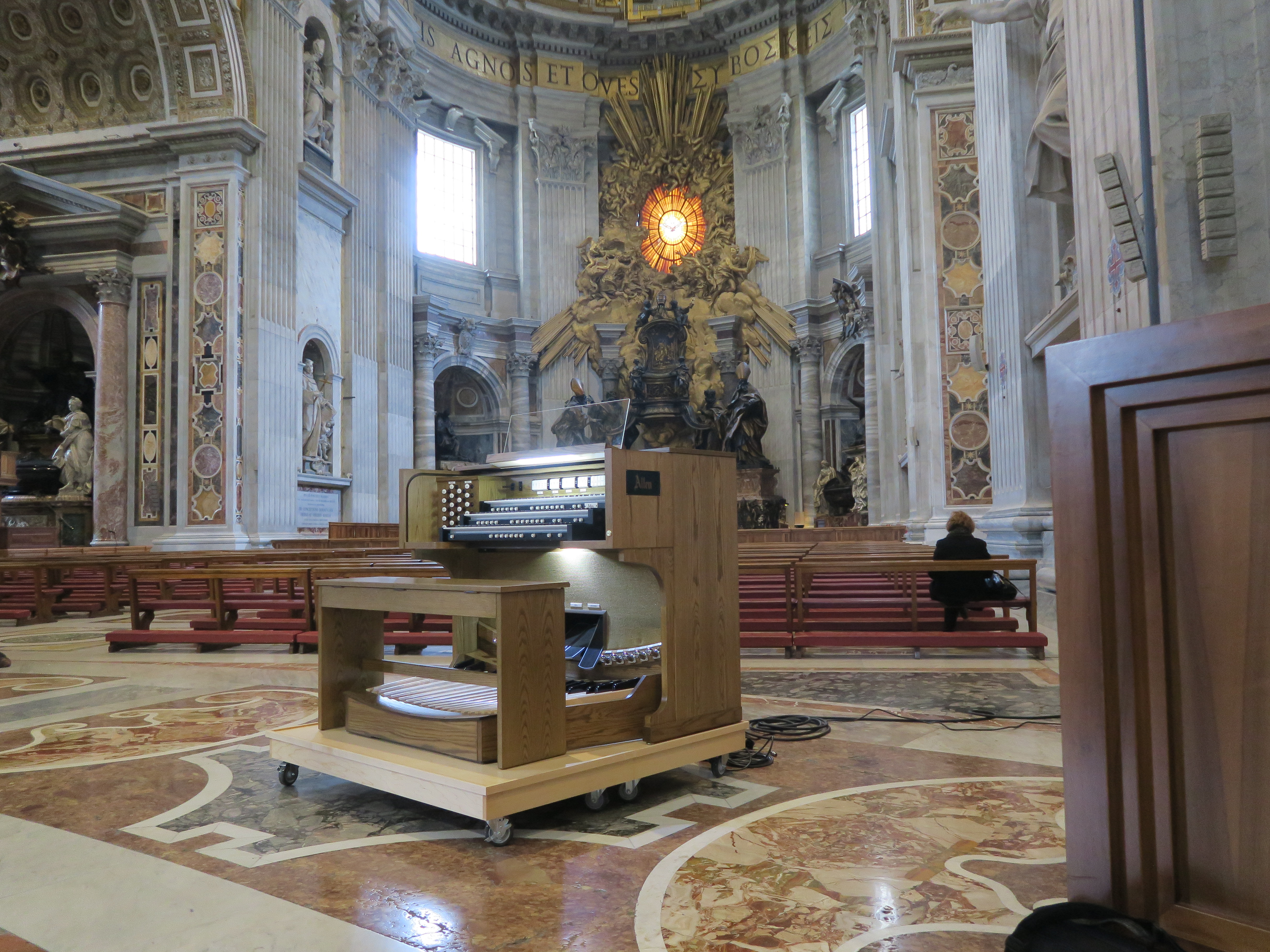 The Allen digital organ installed in St. Peter’s at The Vatican received worldwide press coverage.  The article below was published in The Tablet, the International Catholic Newsweekly.  It is in response to a petition circulated by the Association of Italian Organists protesting the installation of a digital organ in St. Peter’s.

It is disappointing that some from the pipe organ industry impugn the integrity of customers and organists worldwide that have purchased and use digital organs.  Organs should be judged on their musicality, longevity, economic realities, and just as important, the needs of customers.  Organ builders with a different set of priorities seem to have lost sight of who they serve.

I am a second-generation organ builder.  Like my father, my entire adult life has been dedicated to building quality organs, most of which are destined for religious institutions.  The acceptance and longevity of tens of thousands of installations worldwide attest to Allen Organ Company’s heritage and reputation.

In the 1930s, radio and vacuum tube technologies entered the world of organ building.  In 1937 my father, Jerome Markowitz, received a patent for the world’s first stable audio oscillator.  This invention led to organ sounds being generated electronically.  This not only started a revolution in the organ world, but also created a schism between organ builders whose sounds were created by windblown pipes and those that produced sounds electronically.

Since the introduction of electronic organs over 70 years ago, the pipe organ industry has criticized the use of this new technology.  While early electronic organs were capable musical instruments, they could not accurately produce pipe sounds.  Advanced digital technology overcame this deficiency, a conclusion supported by many prestigious Allen installations, including combination organs where Allen digital voices are played and compared side-by-side with pipe voices.

The pipe organ industry’s anxiety relating to digital organs was brought to the forefront recently after one of our Allen organs was installed in St Peter’s Basilica at the Vatican, the largest church in the world.  This organ was heard by the thousands that attended the 2017 Christmas Eve Mass, as well as tens of millions in worldwide telecasts.  The response has been overwhelmingly positive.  This installation and its flexible audio system allows an organ to be more widely used during the Mass, a reality that should be celebrated by all who love the organ and its music.  The pipe organ industries’ contradictory reaction – which can be read here in an online petition to Cardinal Sarah – is similar to what it was seven decades ago, in essence; If it doesn’t have pipes, it is not an organ.

The petition, which purports to have received 10,000 signatures, describes the Vatican’s digital organ as an “electrophone”, “surrogate” and “organ substitute”.  Put into context, this number needs to be compared with the tens of thousands who attended Christmas Eve Mass in the Basilica and at St Peter’s Square, as well as the tens of millions that watched the Mass during telecasts.  These people, along with the musicians at the Vatican, are the ultimate judges of St Peter’s Allen organ.  The petition not only impugns an organ, but those that have already determined that a digital organ is a viable musical instrument worthy of supporting their music ministries in thousands of churches worldwide.

How the Allen Organ arrived at St Peter’s Basilica

In 2017, during a tour of the United States, the Sistine Chapel Choir rented an Allen organ for a concert in Detroit, Michigan.  They were impressed with its tonality and contacted Allen Organ Company regarding an organ for the Vatican.

St Peter’s Basilica has a pipe organ that was installed during the 1950s with additional work done to it in the 1960s.  This organ has created musical challenges for the Basilica.  First, because of the size of St Peter’s, the pipe organ needs to be hugely scaled to create enough sound volume.  This results in the organ being too loud towards the front of the Basilica, yet it still cannot be properly heard throughout the sanctuary.  Coordination of the pipe organ and choir is also problematic.  Finally, as with all pipe organs, the tuning changes along with the temperature in the building.  At times, the organ is not in tune with other instruments used during Mass, a problem that does not exist with digital organs.

With a flexible audio system, the Vatican’s Allen organ includes its own speaker system, as well as audio outputs enabling the organ sound to be integrated with the Basilica’s PA system.  This allows the organ’s sound to be at the appropriate levels throughout the Basilica, and also enables better coordination for telecasts; crucial requirements for an organ to serve the Basilica’s music ministry.  The Allen organ in St Peter’s has stood up to these demanding requirements.

The future of organs

Those that argue against digital sounds for organs seek to stymie the organ’s development.  This is not in keeping with a significant portion of the pipe organ’s heritage.  Throughout a substantial part of its history, the pipe organ evolved with advancing technology maintaining its position as the King of Instruments.  Initially including the advancement of mechanical and electronic control capabilities, digital tone generation is a natural evolution of this march forward in the twenty-first century.

The organ’s heritage emanates from instruments whose sounds are or were produced by pipes.  The most renowned instruments have resided in large European churches.  Neither these instruments nor their heritage is diminished by today’s digital organs.  In fact, these digital organs help maintain pipe organ sound heritage for a broader audience.  However, the realities of economics, modern building architecture, and the changing needs of music ministries, mean that pipe organs are only a viable solution for a small percentage of today’s churches. This is borne out in the number of churches worldwide choosing digital organs over pipe organs year on year.

Many modern churches are acoustically dry due to the use of sound absorbent materials in sanctuaries.  This negatively impacts a pipe organ whose sounds need to acoustically mix in a reverberant environment to achieve wonderful results. The cost of a pipe organ is also typically ten times that of a digital equivalent.

For those who want to see the organ flourish in the twenty-first century, a more pragmatic approach is required – one that places musical results over emotional arguments and self-interest.  It is time to broach the schism that is now over seven decades old.  The entire organ industry should work together to promote the organ and its music.  It is also important that we make serving our customers’ needs our primary objective.