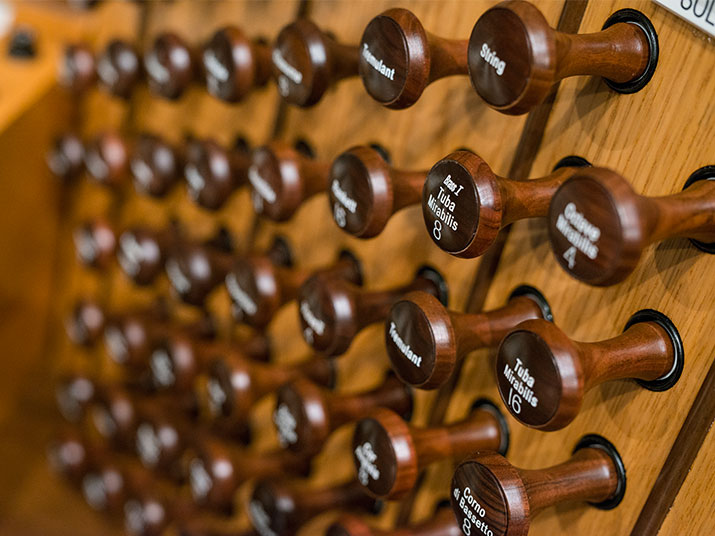 The two types of digital organ suppliers are Manufacturers and Assemblers, each with very different capabilities and commitment to customers.

Organ Manufacturers offer instruments built in their factories.  Assemblers are much smaller and do little manufacturing, buying major assemblies from third-party suppliers.  Often, even their tone generation technology is procured from another supplier.

Johannus Organs – Johannus is a Dutch builder who began offering church organs with sampling in about the late 1980s .  They generally supply organs in the lower price ranges.  In recent years they purchased Rodgers Organs of USA, and the smaller English builders, Copeman Hart and Makin.  While these four brand names are still offered, the quality of these brands and the instruments produced under the parent company’s own name have become less distinct.

Makin – Makin is a relatively small organ builder that mainly sells organs in the United Kingdom.  It has been purchased by Johannus.  Their website indicates that they have used various technologies over the years, but it is not clear on the source of their current organ technology, nor where the organs are currently built.

Rodgers Organs – Rodgers began producing organs in 1958.  Since the 1970s Rodgers has had multiple owners including CBS and Steinway Pianos.  In the late 1980s Rodgers was purchased by Roland of Japan and in about 1991 began offering digital church organs.  As of September 2018 Rodgers continues offering digital organs based on Roland’s technology, even though in 2016 it was purchased by the group that owns the Dutch company, Johannus.  Since its acquisition by Johannus, the Rodgers’ manufacturing facility has been sold and the company has morphed from a traditional manufacturer to an assembler.

Viscount Organs – Viscount is a manufacturer located in Italy that entered the digital organ market in about the late 1980s.  They have historically offered organs at lower price ranges.  Viscount has made multiple attempts to distribute church organs in the United States, including distributing organs through Baldwin Piano Company prior to that company exiting the organ business.  It then distributed organs through Church Organ Systems prior to that company going out of business.  More recently, Viscount has established retail dealers in North America.  While their marketing currently promotes a modeling technology, some of their models use sampling technology and others use a virtual-type tone generation supplied by Hauptwerk (see below).

Content Organs – Content is located in The Netherlands.  Their organs are typically priced similar to Johannus and Viscount Organs with similar quality.  In 2017 Content started building “stencil” organs distributed in the U.S. by The Verdin Bell Company (see below).

Phoenix Organs – Phoenix Organs is located in Canada.  According to published information, Phoenix purchases most of its assemblies from third-party suppliers.  Their tone-generation technology is sourced from England and Phoenix’s website indicates they will be using Hauptwerk tone generation.  Phoenix uses aggressive marketing claims in promoting its products.

Verdin Organ Division – While Verdin’s website touts a 175 year history in bell production, it first began offering organs in 2017.  Verdin imports most of models from the Dutch firm, Content.  Verdin’s Organ Division Manager, Dewey Kuhn, previously worked for Baldwin, Church Organ Systems (prior to those companies exiting the organ business) and Rodgers Organs prior that company sale to Johannus.

Walker Technical – According to its website, “Walker produces electronic tonal enhancement equipment and speaker products, used by a large network of organ builders and dealers throughout North America.”  The Walker website does not indicate whether it, its suppliers of assemblies, or the organ builders to which it supplies digital tonal additions, are responsible for long-term product support.

Hauptwerk – Hauptwerk offeres software that enables a PC to produce organ sounds.  This approach requires significantly hardware to create a complete, functioning organ, as reviewed in the article.  A handful of Micro Assemblers offer organs based on PC-based tone generation.  These include Noorlander (Holland), VPO (USA) (now defunct), Martin (USA) Marshall & Ogletree (USA), and others.